STAMFORD, CT — On the heels of researchers in Japan diagnosing thousands of women with RHS (Retired Husband Syndrome), American researchers conducted a similar study in WWE, and diagnosed the entire writing team with a chronic condition known as DFS (Dumb F*ck Syndrome).

The San Francisco Chronicle reported the RHS story in mid-October.

RHS is a disorder many Japanese women suffer from when their husbands of many years finally retire.

The study showed that with all the new free time spent together, Japanese couples discovered they had nothing in common with each other anymore and the women wanted divorces.

Over here in the US, researchers conducted a very similar study at WWE’s headquarters in Stamford, CT.

“We put 10 people in a room, 2 of them WWE writers,” said head researcher William Gusto.

“Their behavior is typical for persons diagnosed as Dumb F*cks,” noted Walker, who was stunned that they didn’t think Shelton Benjamin should be pushed to the main events.

“The other eight people in the room had no prior wrestling knowledge, and even they were smart enough to see that Shelton deserved more. But the writers, the ones in charge of Shelton’s career, wanted to bury him in a tired, old, racially-based angle.”

In an adjacent study, one hundred Connecticut residents were shown a video of Christian’s interview with Vince McMahon from the Raw in Madison Square Garden. In the segment, Christian received an incredible ovation and appeared very over with the fans when he complained that he should be in main events.

Ninety of the people voted that Christian deserved a bigger push based on the interview. The other 10 people, not surprisingly, were WWE writers who indicated Christian should instead be switched to the weaker SmackDown brand and lose in every match. They instead wanted to give pushes to wrestlers who fans didn’t care about, but were physically large, such as Chris Masters, Viscera, and Gene Snitsky.

Instead, the Dumb F*cks at WWE insisted on pushing stiffs like Chris Masters, Viscera, and Gene Snitsky. Dr. Walker believed those 10 writers were Dumb Fcks as well.

In the most alarming exercise, three people were chosen at random, along with one WWE writer, to write a storyline for legendary WWE announcer Jim Ross that would write him out of the company.

Random subject #1 wrote a story in which JR was honored with an official ceremony, inducted into the WWE Hall of Fame, was given a speech by Steve Austin, and then gracefully passed the torch to new announcer Mike Goldberg.

Random subject #2 chose to turn Raw into “JR Appreciation Night,” with 2 hours dedicated to all of JR’s favorite matches from his long, storied career.

Random subject #3 opted for a “JR, this is your life” segment in which Mick Foley would run through all of JR’s accomplishments in a humorous, entertaining way.

However, subject #4, the WWE writer, wrote a sketch in which JR was slapped by Stephanie McMahon, given a low blow by Linda McMahon, and replaced by a subpar announcer named Johnathan Coachman. The same subject wrote another sketch that included Vince McMahon in a hospital room supposedly removing objects from JR’s rectum, including a goldfish, football, helmet, and mannequin head. WWE eventually chose the script written by subject #4.

Dr. Walker stopped the study immediately and dialed 911. “I had to get an emergency medical team out there ASAP,” said Walker. “Anyone who thought of such a stupid sketch is obviously a Dumb F*ck of the highest order, and this individual should not be walking the same streets as our women and children.”

Subject #4 remained in a mental illness facility at press time, but sources said he was given a raise by WWE and allowed to write Raw scripts from his residency and fax them to Vince McMahon every Monday morning.

Dr. Walker expressed fear that the Dumb F*cks on WWE’s writing team would infect other employees with the disease.

“The head writer, the one they call Stephanie,” said Walker, “she is already showing signs of becoming a Dumb F*ck. Just the fact that she thought she should be on camera proves she is clearly showing all the classic symptoms of DFS.”

When asked if any normal person walking the street could perform better on the job as WWE writer than the current writing staff, Walker responded affirmatively.

“Absolutely. These people need not be wrestling fans either. Anyone, and I mean anyone, would perform better at that job than the people currently doing it now.”

WWE employees Dusty Rhodes, Kevin Dunn, Brian Gewirtz, and Steve Lombardi are being tested next week for DFS. But Walker says that according to his preliminary research, all are guaranteed locks to be diagnosed as Dumb F*cks.

As for Vince McMahon himself, Walker is commissioning a different study.

“Vince might have a different condition, not DFS,” explained Walker. “Evidence shows Vince might be suffering from EOTMWRHBISD-ABBTCDFAAWF: Egotistical, Out of Touch Madman Who is Running His Business Into the Shitter Due to Arrogance, Bad Booking, and Total and Complete Disrespect For Any and All Wrestling Fans. 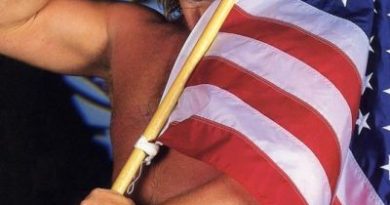 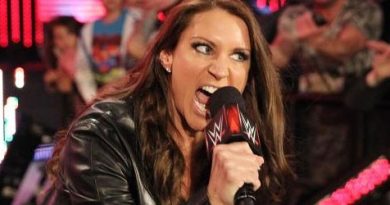 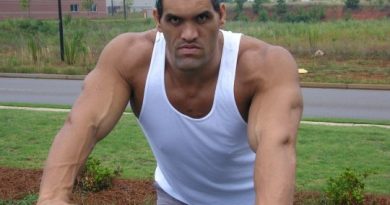 Great Khali Edited Out of Life