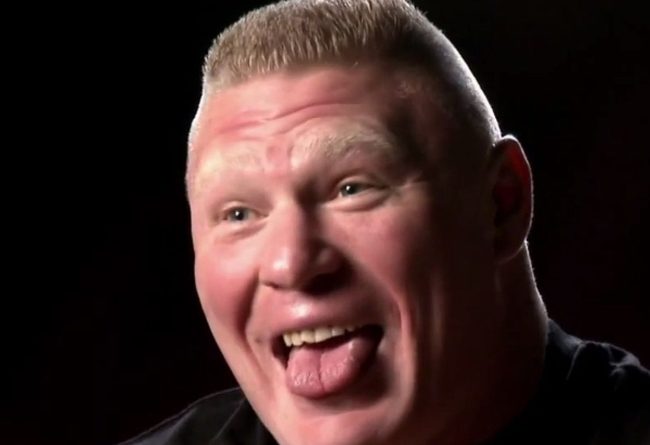 “Brock Lesnar cheated, he took steroids,” blah blah blah. Seriously folks, if that’s all you got, you’re a sorry bunch of pansies. But we already knew that.

Let’s get something straight. Brock Lesnar does what Brock Lesnar wants. And there ain’t nobody that can do anything about it.

Did I take steroids before my fight with Hunt the C*nt? You’re damn right I did. And I’d do it again.

So let’s go through the timeline, shall we?

Being a monster isn’t easy, but I wouldn’t expect any of you lazy sons of bitches to know anything about that. I tower over each and every one of you, I’m stronger than any of you, and I can choke any of y’all out with the snap of a finger (and while I’m at it, your neck too).

If I don’t take steroids, I’m still a monster. You saw me destroy everyone in the NCAA tournament. But ON steroids, I’m an absolute beast incarnate. A true conqueror. The man who ended the Undertaker’s streak. The “1” in 23-1.

Is it cheating? Yeah. So f*ckin’ what. Big deal. Like none of you ever cheated? I might be a jock, but I’m not a dumb jock. I’m a RICH jock, and thus, I can do whatever the f*ck I want.

If I were a dumb jock, then how was I able to sign a part-time contract with WWE that pretty much granted me freedom to take whatever drug I wanted? Can YOU do that at your job? Show up loaded at your minimum-wage job deep frying potato sticks and see what your boss says. Not that your job requires any semblance of skills, but your boss would still fire your sorry ass if you show up wasted.

But Brock Lesnar? I can take steroids, hemorrhoids, asteroids, humanoids, flavonoids, whatever-a-noids, and Vince McMahon can’t do a damn thing about it. What’s he gonna do, take me to court?? He tried that once before, and he got an F5 when the gavel swung down in MY favor. Brock 1, Vince 0.

Along came UFC this year, wanting me to fight at UFC 200.

I wanted to fight, so I fought. Contract shmontract. Vince works for ME, boys and girls. Didn’t matter what those useless words on that useless piece of paper said. I wanted it, and I got it. All I had to do was give Vince ‘the look,’ and he let me fight.

And not only did he let me fight (or rather, I let HIM let me fight), but Dana White also paid me a fortune to do so.

I DON’T EVEN HAVE TO TALK. Paul Heyman does my talking for me. I just have to stand there, look menacing, and bounce back and forth like I’m jogging in place. Whoopty-f*ckin’-do.

I could’ve done this with or without steroids. But I chose to take them. Why? Because Brock Lesnar wanted to, and BROCK LESNAR DOES WHAT BROCK LESNAR WANTS.

They picked me an opponent, if that’s what you wanna call him: Mark Hunt, fat f*ck extraordinaire.

He’ll beat me, you said. I wouldn’t be able to take him down, you said. It’ll be over in the first round, you said. He has one-punch knockout power, you said.

I told you I’d destroy Hunt the C*nt, and that’s exactly what I did. Hunt?? I hunt all the f*cking time. I’m hunting while the entire WWE roster breaks their backs every night working all those stupid little house shows while earning less than 1/10th of what I make. Who’s the dumb jock now?

Hunt the C*nt went down, just like Randy Couture, Shane Carwin, Frank Mir, and Heath Herring before him. If you expected anything different, you’re a f*cking idiot.

I earned several million dollars in 15 minutes. I dare any one of you armchair fighters to do that. Earn even just one million dollars over the course of your pathetic life; go ahead, I dare you. You can’t. I did it in 15 f*ckin’ minutes.

After that rah-rah speech I gave after that ass-kicking (you didn’t really believe anything I said in that speech, did you?), I hugged my fine-ass cougar wife while you all grabbed tissues to jerk off to her Playboy spread like you do every night.

Will the UFC forfeit some of my PPV bonus money? Perhaps. Do I care? NO.

Whether I make $2 million or $6 million is irrelevant. It’s still seven figures that I got to make in 15 minutes. And guess what? All that media attention I got for beating that tub o’ lard will guarantee me more money, more bargaining power, more endorsements, and more adulation from Vince.

What was the alternative? Lose to Hunt the C*nt? Like that would’ve helped my career?? If given the option between losing to that Samoan Butterbean, or taking steroids and beating his ass decisively, what the Hell do you think I chose?

Not that I couldn’t have beaten him off steroids, because I could’ve. But I didn’t want to. Remember, Brock Lesnar does what Brock Lesnar wants.

Hunt the C*nt now wants my purse. First of all, I’m a real man, and I don’t carry no f*ckin’ purse. Second of all, Hunt the C*nt is entitled to ZERO percent of my earnings, because he earned ZERO percent of it. I could’ve fought a f*ckin’ broom and drawn just as many PPV buys.

And quite frankly, a broom would’ve given me more of a challenge than that flabby blob of blubber did.

Third, Hunt the C*nt is using my test failure as an excuse for his loss. I guess it helps him feel better about himself, and Lord knows he needs all the f*ckin’ help his sorry ass can get. But the sad thing is that he thinks anyone actually believes his fairy tale. Like anyone doesn’t think I’d whip that tattooed turd if I hadn’t taken steroids? Mark is just that: a mark. For himself. He’s not just his biggest fan, he’s his ONLY fan.

I guess it’s as lonely at the bottom as it is on the top, eh Marky boy?

In any possible scenario you fantasy bookers conjure up, I win.

A rematch with Hunt the C*nt? I win. I win the fight, and I win more money because the interest has now quadrupled.

My contract renewal? I win, because now WWE and UFC will bid even higher for my services after all the headlines I’ve grabbed. Those new UFC owners have deep pockets, and I plan on lining my own pockets with some of that new cash.

My reputation? I win, because no one in the press will dare ask me about this subject for fear I’ll beat their asses. And I would. Just try me.

So to summarize, yes I took steroids, and yes, I’d do it again. In a fc*kin’ heartbeat. Test me all you want, motherf*ckers. I’ll pass any test, and if I fail any, it’ll be after the fact. Just like with Hunt the C*nt. Who? That’s right, I thought you’d forget his name. Nobody remembers the losers.

I don’t like losers. Write that in your little book.

These are the last words I’ll ever give on this subject, so shut the f*ck up and leave me the Hell alone. Next time I need to say something, I’ll do what I always do: let Paul Heyman talk for me. He’s better at it, and as the only human being wider than that human wheezing machine Hunt the C*nt, his lips could use the exercise.

Until then, Brock Lesnar is gonna do what Brock… oh forget it. Seriously, f*ck off.

Disclaimer: Brock Lesnar didn’t really write this. The Armpit did. But we know it’s what Brock would say. 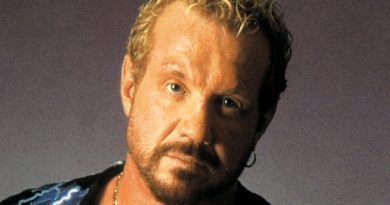 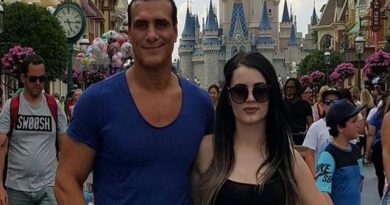 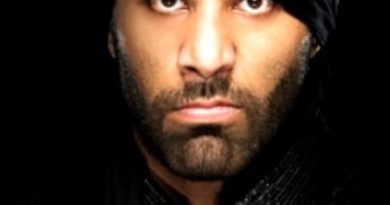