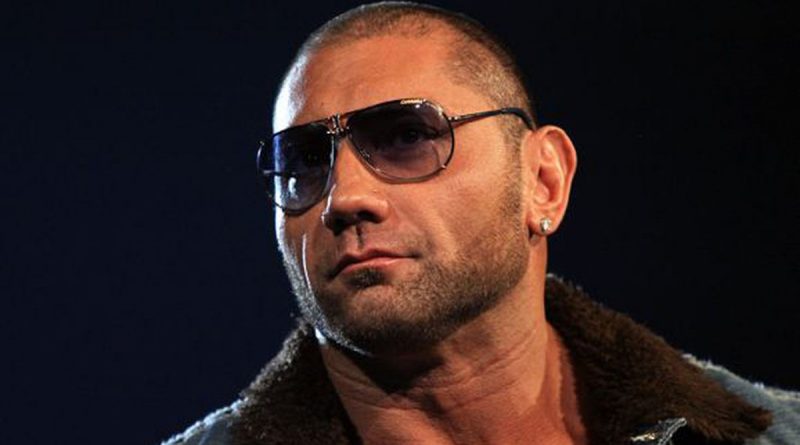 Howdy losers! Dr. Dave Batista is here to dish out the latest sex advice for those who badly need it the most. And let’s make this quick, as I gots me a movie to promote!

Yes, as you can imagine (something you’re all used to doing, since you imagine having sex with imaginary women who would never touch you in real life), my schedule is super busy right now as I promote GUARDIANS OF THE GALAXY 2. Thought I’d use this short window of opportunity to eek out another Dear Dr. Dave column before I become yet an even bigger star.

And becoming a bigger star means banging even more women, although I don’t see how that’s even possible given how jam packed my ‘f*ck schedule’ already is. Probably means I gotta let a few 10s go, and replace them with 11s and 12s.

Seriously, when I start having even more sex than I already am, I’m considering cloning myself. I see no other option other than giving up sleep, which ain’t gonna happen. So yeah, there might be two and possibly three Batistas running around by the time this movie finishes its run in the theaters. My brand is growing exponentially, dude. So is demand for my eight inches of penile flesh, and there are only 24 hours in a day.

Fire up the questions, jerkoffs. My free time is dwindling so let’s make this as quick as it takes y’all to soak your tissues to Alexa Bliss’s cleavage.

Congratulations on your new movie, it’s great! And you’re great in it, too. I’m thinking of taking this girl on a movie date with me to see it again. What is your best tactic when making a move at the movie theater? The ol’ yawn-and-put-my-arm-on-her-shoulder seems so tired and cliché.

Yawn and grab her with your arm? I’m not sure which is more gag-inducing: the stank of your horrific breath as you yawn, or the stench of your putrid armpits as you raise those flabby arms of yours. Either way, you both lose. Honestly, assh*le, you’re better off just getting BOTH of you drunk and letting what happens come naturally. That way you’ll both be too smashed to remember anything the next morning.

At this point you’re probably expecting me to heap praise upon your accomplished ass, simply because you managed to get a date? And by giving my movie and me a compliment, you expect me to go easy on you, knowing that your paltry movie ticket put a few bucks into my pocket?

Your question is lame on so many levels, it almost made me upset. Fortunately for me, I get laid with FAR too much regularity to get upset about anything for more than a millisecond. Still, it frustrates me to see women out there masquerading as men, serving up their testicles on a platter for women who surely don’t even deserve them. To think, this country and its freedoms were founded on the backs on brave men who risked and lost their lives fighting for sorry asses like yourself who can’t even decide which gender they want to identify with. F*cking disgrace.

Where do I begin with your sorry ass? First off, Einstein, why don’t you think really long and hard about when the last time I even WENT on a date was? Did your pea-sized brain ever consider the fact that I don’t NEED to date? And even if I did have that need (the thought of which is unfathomable), do you really think I’d rip up my man-card to shreds by even paying for ANY woman to escort me to the f*cking movies? Seriously, you think you’re complimenting me, but you’re OFFENDING me. God damnit!

Listen, sap. I. Don’t. Date. The only effort I make to bring women into my life is walking to the door and turning the damn knob, because they’re constantly knocking to come in and get a piece of the Animal. As you’d expect, they come in packs at a time, so they form a line. Ever camp outside a record store to get front row seats for a concert by some lame-ass alterna-wimp band like Phish or Creed? Of course you have, because you’re a sissy. The line is long and losers are in their sleeping bags roasting marshmallows over a fire, right? Well, that’s the scene outside my mansion on a daily (and nightly) basis. Read ‘em and weep, pansy boy.

And when I’m filming a blockbuster like Guardians of the Galaxy, the same process repeats itself, except now it’s not a mansion, but my trailer. And believe you me, that trailer is shakin’ 24/7 like a Bay Area quake.

So why would a Dave Batista take one of these beauties, all of whom are gorgeous and begging for my manhood, give up said manhood and ask them out on a stupid little date? Granted, I can see how taking a woman to my OWN movie might impress her, but why bother? They don’t NEED impressing. All that would do is feed my own ego, which might be fun for kicks, but dude, I’m too busy shagging ho’s to even give it a second thought.

As for your pathetic self, how can you possibly look yourself in the mirror? For one, you’re probably ugly as sh*t, so looking in the mirror is hard enough. Second, why would you dare spend a Goddamn penny on some broad who’s not even sleeping with you yet? That’s BACKWARDS, jackass. Let her EARN your time, money, and effort before you even entertain the notion of a quote-unquote “date.” Dating is for losers. Which I guess you are, so…

Let’s say you do your homework and make HER pay her way. You know the drill. Don’t pick her up; make sure to MEET her inside the theater. Get there LATE. That way SHE pays her own way, and YOU just pay for yourself (normally I’d advise you to scam your way in for free, but it’s my movie so I want to make as much money as possible). Being late also shows VALUE, in that she’ll get the message you have better things to do than waste two hours on her unworthy ass.

Granted, I know you have NOTHING better to do, and you know that too. Hell, she probably knows it too. You still must do it anyway to TRICK her. Remember: you’re gross. Which means she’s gross too, and gross people are easier to fool. After all, I’ve fooled you into even thinking you stand a chance with anything female, right?

Now get lost, you disgust me.

Sir, I have a question of a more serious matter. I actually do have a girlfriend already, but we’ve been arguing a lot lately. Problem is, I’m a Trump supporter, while she hates him and voted for Hillary. We keep getting into fights and we barely have sex anymore. What should I do?

Listen up, f*ckwad. One of the benefits of having sex from dusk ‘till dawn is that I don’t have any time (or desire) to follow the news or politics. While Donald and Hillary were debating how to deal with North Korea, I was dropping nuclear sperm bonds into this hot Korean’s Northern regions. I ‘seriously’ (to use your word) don’t give a f*ck who our President is, because either way I’m gonna be rich, famous, and getting laid.

Politics have never once entered into the equation of the broads I bang. Why? Because most are too stupid to even care, and more importantly, their desire to ride Mount Batista vastly overrides their political opinions.

And therein lies the sad truth, sister. Your “girl” (if in fact she really is a girl, because these days you can never tell with all the transgender freaks) isn’t sleeping with you because of politics. She’s not sleeping with you because of YOU. Her hatred for Trump is just an excuse, and the REAL reason is, frankly, you’re a slob. You can’t f*ck. You’re unattractive, broke, and you show no signs of changing anytime soon. Sorry to break the news to you. Actually, no I’m not. It’s funny! It’s funny telling losers what losers they are.

In fairness to you, she’s a slob too. I imagine some grotesque, unshowered, unshaven liberal mess of a woman, with armpit hair the length of my c*ck, a buzz cut ala Dolph Lundgren in Rocky IV, piercings in every orifice, and a belly so big that she can’t even see what a forest her bush has become.

Also in fairness to you, she’s probably giving up on men in general. Who can blame her? I mean, she’s with YOU, so she must have virtually no standards. And the laughable sex and lack of orgasms you provide must be leaving her unsatisfied. And again, in fairness, she must be so painful to look at that no man wouldn’t even WANT to get it up for her. It’s a lose-lose situation for both y’all. Make that a lose-lose-LOSE situation, because I lose too! The thought of you two porking each other has made me nauseous, so excuse me while I pop the whole damn bottle of Pepto just to finish writing this Godforsaken paragraph.

So let’s just end the charade. Dump each other, okay? Let her f*ck all the other Hillary voters, man and woman alike. You? Shape up, lose weight, take a Goddamn shower, and find women who agree with your politics. Don’t pretend to support any politician to get laid. Stand your ground, be proud of what you believe in, and that confidence will attract like-minded individuals.

Oh, who am I kidding. You’re helpless. Here’s some better advice: take the money you’ll save from Trump’s tax cuts and just find hookers. That way you don’t have to deal with their bullsh*t, and since you’re paying them, they’ll actually pretend to make you think you’re NOT a slob.

But don’t be surprised if one of those hookers turns out to be that liberal girlfriend of yours. She’ll be so lonely and horned up from nobody wanting her feminist ass that she’ll be as desperate to get paid for sex as you’ll be to PAY for sex.

Don’t expect another column from me for a long, long time. The line outside my door makes the crowd at WrestleMania look like a ghost town, bro. And unlike WrestleMania crowds, which are chock full of pathetic doughboys carrying around fake championship belts (what exactly are they champions of anyway??), my crowd looks like an audition for a modeling agency. Envy me, creeps. This is my life, and it f*cking rocks.

Go see my movie again and again, so that the line just keeps getting longer. I’m not dead, but I’m sure as f*ck in heaven! Hasta la vista, pricks. Keep sending me your depressing letters, and I’ll read them and laugh while bumping and grinding the kind of women you fantasize about. 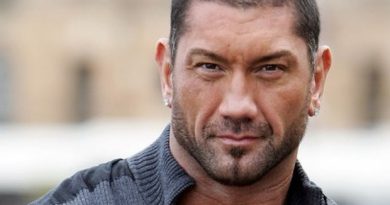 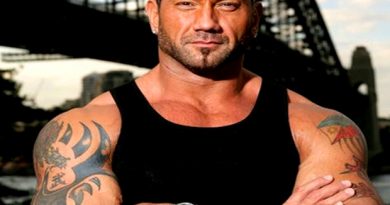 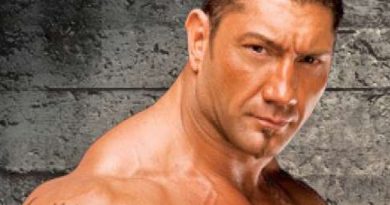